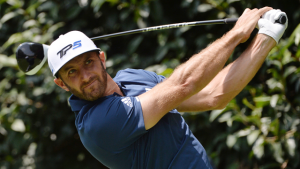 The higher the elevation, the thinner the air. For golfers, that means less friction on their golf balls, which leads to shots with all clubs traveling considerably further than usual.

Just how much further? It's different for everyone, but check out this Instagram post Justin Thomas posted after a practice round in 2017. It's a photo of his launch monitor readings, which shows his driver carrying almost 356 yards and totaling nearly 384 yards.

OK. Calm down. Chances are you aren't going to hit it that far.

But, even if you're just a common golfer, you're still going to have to factor in how altitude will impact your game.

Get to the range before your round at altitude. Don't wear yourself out -- remember, the thin air is also going to take a toll on your body -- but get your "adjusted" numbers dialed in.

It's going to be different.

"When I get to 3-4,000 feet, it's about a 7-yard difference in distance for me," said PGA Professional Rob Labritz. "The higher you get, maybe it's 10-15 yards. Don't change anything in your swing, but stand out there and figure out how far you're carrying the ball. And then trust it. It takes a round or two to get used to."

What you might find, Labritz explained, is if you're someone who typically hits your 9-iron 150 yards, suddenly that club from that yardage is going to be flying over the green.

"Playing well at altitude requires you to commit to a mindset," Labritz said. "Just like a round at sea level, you want to make solid contact. You just have to accept that it's going to travel further. The more practice you put in, the more comfortable you'll be."

"They're the best at adjusting," Labritz said. "That's why they're on Tour."

So remember: Higher elevation = less friction in the air. As a result, you're going to be hitting the ball distances you've typically only dreamed.

Tweet
More in this category: « Which is the LONGEST Golf Brand? Sirak: Amy Yang, One of the Most Reliable Players of Her Generation »
back to top