Sirak: Amy Yang, One of the Most Reliable Players of Her Generation 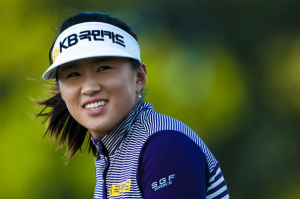 Fred Couples, the World Golf Hall of Fame member who won the 1992 Masters, was once discussing the overuse of the word “great” when categorizing athletes. “I’m not great,” Couples said, setting up a classic Freddy finish to a thought. “I’m good. But good’s not bad.” That Couples-ism could well be used to describe Amy Yang.

Yang, 29, enters her eleventh full season on the LPGA having racked up the kind of numbers that scream solid play. But her only occasional visits to the winner’s circle – a hallowed place she has yet to enter in a major championship – leaves her just this side of greatness.

But, oh, how a victory or two – in just the right places – could change all that. And this week’s Honda LPGA Thailand, where Yang has won twice, is not a bad place to start. A few more victories, especially in a major, would change the way her resume is viewed, elevating near-misses to impressive consistency.

Quite simply, Yang has been one of the most reliable players of her generation, a name quite accustomed to being on the leaderboard. In eight of her 10 LPGA seasons, Yang’s been in the top-20 in scoring and has never been worse than 37th. In nine of those 10 seasons, she’s been in the top 25 on the money list and in all but one season has had at least five top-10 finishes, totaling 64 top-10s overall.

But even more impressive is what Yang has done in the majors. Even though she has yet to win one, she has finished in the top 10 a remarkable 17 times, with 10 of those being top-fives. Until last year, Yang had at least one top-10 finish in a major every year since joining the LPGA full time in 2009.

Yang likely wears the double-edged title of being the best player of her generation without a major championship.

“I never counted it before,” she said about all those top 10s, “but [it’s] a huge thing. Just can't do it often, so I'll take it I'm getting better, playing good every year.”

One of Yang’s most impressive achievements was qualifying for the South Korea team at the 2016 Olympics. And in what pretty much encapsulates a career of what-could-have-been, she finished T-4, one stroke out of third and the bronze medal.

“It was very hard,” Yang said about being one of the four players to qualify for South Korea, perhaps one of the most difficult teams in all of sports to make. “A lot of great players from South Korea, and I had to really focus and work hard till the cut.”

“Not sure what went so well the past few years, but I enjoy playing in a major tournament,” Yang says. “The tough set up makes me focus more.”

Yang started playing at age 10 in Korea and when she was 15 her father Joon Mo (James) and mother Sun Hee (Sunny) moved the family to Australia so Amy could focus on golf. That move paid off quickly as she won the 2006 ANZ Ladies Masters in New Zealand as a 16-year-old amateur, then the youngest winner on the Ladies European Tour, which earned her an LET card.

In 2008, she won the Ladies German Open on the LET and donated her $61,000 prize money to earthquake relief in China. Later that year, she earned full status on the LPGA for the 2009 season at Q school.

Yang has won eight pro tournaments – three LPGA, three LET and two Korea LPGA. Her three LPGA wins have come in odd years – 2013 at the KEB Hana Bank Championship in Korea the 2015 and 2017 in the Honda LPGA Thailand, which bodes well for her this year since it ends in an odd number.

“I like to play the Thailand tournament,” she says. “I just enjoy it so much – the people there, the food and the golf course.”

But her game is also marked by explosive play. When Yang makes birdies, she makes them in bunches. Five times she has been in the top 10 on tour in rounds in the 60s and in the 2015 U.S. Women’s Open at Lancaster (Pa.) Country Club, where she was second, Yang made 19 birdies and an eagle over 72 holes.

“My iron shots are the stronger part of my game,” she says, assessing her play in an unassuming way. Then she adds: “I’d like to improve my putting.”

While the stats suggest that Yang is a solid putter, when she says she wants to get better she is likely remembering not how many putts she has missed, but when she has missed them.

But for a few errant strokes, Yang could have a few major titles on her resume and those 17 near-misses would be appreciated for what they are – heroic efforts. And at not-yet 30 years old, there is still plenty of time for Amy Yang to change that conversation from good to great.