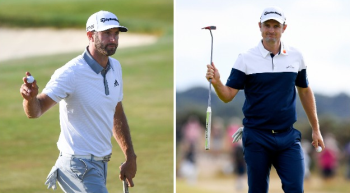 PALM BEACH GARDENS, Fla. – Dustin Johnson and Justin Rose — each two-time winners this year — share the lead in the chase for the 2018 PGA of America Player of the Year Award, one of the season-ending honors presented by the PGA of America for excellence by a PGA TOUR professional.

Johnson, who also leads the Vardon Trophy standings, matched Rose with 56 total points based upon victories, season money earnings and adjusted scoring averages. Justin Thomas, the 2017 PGA Player of the Year, is third overall with 54 points, followed by Open Champion Francesco Molinari with 46 and Bubba Watson with 44.

Since 1948, the PGA of America has honored the game’s best players with the PGA Player of the Year Award. It is presented to the top TOUR professional based on a point system for tournament wins, official money standings, and scoring average. Points for the 2017-18 season began with the Safeway Open on Oct. 5, and conclude Sept. 23, at the TOUR Championship.

Tweet
More in this category: « Brittany Lincicome Will Become Sixth Woman to Play on PGA Tour Robert Garrigus Shoots 63 for Early Lead at Canadian Open »
back to top