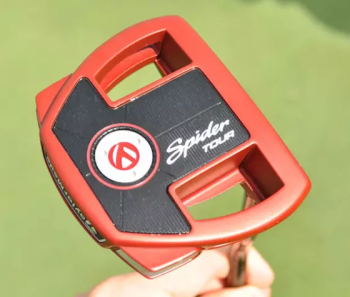 Dustin Johnson returned to his TaylorMade Spider Tour putter at the Memorial Tournament presented by Nationwide, but for a brief moment during THE PLAYERS Championship, 17-time PGA TOUR winner mixed things up and inserted a new Spider Mini mallet.

TaylorMade believes Mini could be a good option for the golfer seeking a mallet in a smaller overall footprint. While the head size was reduced by 15 percent, when compared to Spider Tour, the putter still offers high-MOI properties and stability at 355 grams.

The reduction in head size results in a more forward CG — 37mm to 30mm away from the leading edge — which in turn allows the head to release through the hitting area like a blade putter.

"Spider Mini gives golfers a brand-new look and feel while still remaining very much a part of the Spider Tour family," said TaylorMade Tour manager Chris Trott. "It has the same Pure Roll insert and presents many of the same features that make Spider such a successful putter, but it is delivered in a scaled-down shape for those seeking a smaller footprint without sacrificing stable, high-MOI performance."

The putter also includes a polymer-grooved Pure Roll face insert that combines a softer feel with 45-degree grooves to promote a better forward that reduces skidding. The weight ports in the back of the head were also scaled down and cast directly into the putter's head; an adjustable weight was added to the sole to dial-in head weight. Additional weights (sold separately) are available in 2.5-, 5-, 7.5-, 10-, 15- and 20-gram options.

The T-sightline Dustin Johnson used on his Spider Tour to win the Hyundai Tournament of Champions is now featured on Spider Mini. According to TaylorMade the "new sightline’s depth mimics the dimensions of a classic blade putter" to provide an easy transition for the golfer who wants to test a mallet shape.

TaylorMade's Spider Mini will be available June 8 and retails for $300 in three lengths (33, 34 and 35 inches) with SuperStroke's Pistol GTR 1.0 grip.

Tweet
More in this category: « 5 Reasons a Shot Clock in Golf Could Be A Good Thing Fantasy Golf Power Rankings: Top 50 for U.S. Open at Shinnecock Hills »
back to top