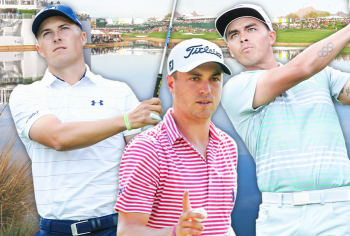 Additionally, Charley Hoffman, a longtime Waste Management Ambassador and currently the 23rd-ranked golfer in the world, also committed to the play.  A field of 132 players will vie for the $6.9 million purse, the $1,242,000 first-place check and 500 FedExCup points.

“Jordan, Justin and Rickie are some of the most talented and popular golfers in the world and we’re thrilled they’ve committed to play,” said Tournament Chairman Carlos Sugich.  “All three of these players, as well as Charley, are great ambassadors for our tournament and we’re excited to watch them compete in 2018.”

Thomas had a remarkable 2017 PGA TOUR campaign that included his first Major Championship victory (PGA Championship) among his five wins. He had a total of 12 top-10 finishes in 2017 on his way to being crowned FedExCup Champion and PGA TOUR Player of the Year.  He is currently third in the Official World Golf Rankings.

Spieth is coming off a three-win season in 2017 where he took home first-place finishes in the AT&T Pebble Beach Pro-Am and back-to-back victories at the Travelers Championship and The Open Championship. The latter victory was Spieth’s third Major victory of his young career and his 11th PGA TOUR win.   Spieth finished second in the final FedExCup points tally behind Thomas and ranks third in the Official World Golf Rankings.

Two-time WM Phoenix Open runner-up Rickie Fowler is off to a solid start in 2018 with a win at the Hero World Challenge and a second-place finish at the OHL Classic at Mayakoba. Fowler racked up 10 Top-10 finishes in 2017 that included a win at the Honda Classic, two T2 finishes and a T3 finish at Quicken Loans National. He currently sits seventh in the Official World Golf Rankings.

The Thunderbirds were founded in 1937 with the mission of promoting the Valley of the Sun through sports. The Thunderbirds consist of 55 “active” members and more than 250 “life” members.  In 2017 The Thunderbirds raised a record $10.1 million for charity from proceeds from last year’s tournament and have eclipsed $122 million in charitable giving since its inception in 1932.  For more information on The Thunderbirds visit www.thunderbirdscharities.org.