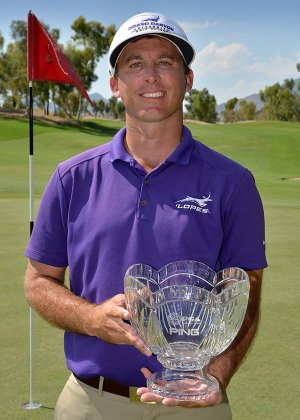 “I rate this as a 10 out of 10,” said Mueller. “My first Section Championship and I get a win, which you don’t get to win that often in golf. It’s something I don’t take for granted, especially since I don’t play that much anymore. I’ll cherish this forever because you don’t know when you’re going to get a chance to win a big tournament like this. It was an awesome experience all the way around.”

At the start of the final round, Mueller, 34, PGA Director of Golf at Grand Canyon University G.C., was tied with Craig Hocknull for the lead and paired together in the final grouping of the day.

Both players wasted little time putting red numbers on the scoreboard as Mueller birdied four of the first five holes, including the first three, and Hocknull, after a par on the opening hole, rattled off four straight birdies at Nos. 2-5. Just like that, they were tied again.

“I got off to a great start today,” Mueller said. “Making those three straight birdies on 1, 2 and 3 calmed my nerves a little bit but he (Hocknull) got off to a fast start as well. Being paired with him probably pushed me a little bit to keep me in the mindset that I have to keep making birdies because I knew he was going to keep making birdies. I needed to keep my foot on the pedal and keep my focus the entire round.”

On the par-3 6th hole, Mueller missed the green, which resulted in a bogey moving Hocknull to the top of the leaderboard by one shot. After two bogeys by Hocknull on Nos. 7 and 9, Mueller, who parred the remaining three holes on the front side, switched positions with Hocknull and had a one shot lead with nine holes to play.

Playing two groups in front of the leaders, Dennis Downs began the final round four shots out of the lead and knew he needed a special round to have a chance at the title. He managed to cut the deficit in half through nine holes after making five birdies on the front side for a 5-under-par 31.

“Coming in I knew I needed to stay aggressive and accurate on every single shot,” said Downs. “For the most part today I was able to do that until I made the turn and became aware of where I was on the round.”

Downs, 35, PGA Director of Instruction at Reid/West Golf Academies (Pebble Creek), gave back two shots after bogeying Nos. 10 and 11 while Mueller and Hocknull parred the first three holes on the back nine. Mueller was still one ahead over Hocknull with six holes, including the birdie friendly Nos. 13-16, remaining.

“I lost focus at the turn and ended up making those two bad bogeys on 10 and 11,” Downs said. “I had to step back and think about it and get back in the moment.”

Get back in the moment Downs did. He made five straight birdies at Nos. 12-16 but didn’t know if it would be enough as he wasn’t watching the leaderboard and what was happening with the leaders two groups behind.

Mueller, who was disappointed following the second round by not capitalizing on those pivotal birdie holes, saved his best for the final round. The same four holes he played in 1-over the day before, he played in 3-under today – making birdies at Nos. 13-15.

“Making those three straight birdies at 13, 14 and 15 really won the Championship for me,” Mueller said. “Yesterday I played the same three holes at 1-over and today 3-under so that was the tournament right there.”

Hocknull, 42, PGA Director of Instruction at Outback Golf Academy, only managed to birdie No. 14 over the same stretch of holes. He finished the back nine with a 1-under 35 and his 54-hole total of 204 (-12) left him in sole possession of third place behind Downs, who parred his remaining two holes.

“I had a pretty good rhythm all day long today but this week has just been frustrating for me,” said Hocknull. “I got some bad breaks in bunkers and in the desert areas all week. I really felt with the bad breaks I was getting today it was going to be difficult to put a low number up on the board again but Jesse played great. To shoot 66 in the final round any time is a great round. It’s what he needed to do and he went out there, executed and played a solid round of golf.”

With only three holes remaining, Mueller knew all he needed to do was par his final three holes to earn the championship title.

“I didn’t change my game at all today until probably the last three holes where I played them a little safer,” said Mueller. “I laid up on 16 today where if I was behind or it was the first or second round, I would have definitely gone for the green on my second shot.”

Mueller parred his final three holes and earned his first Southwest PGA Championship title. He finished with a 54-hole total of 201 (-15) and earned $7000 for the victory. In addition, he earned an exemption into the 2018 Waste Management Phoenix Open, scheduled to take place February 1-4 at TPC Scottsdale (Ariz.).

“The victory and the Phoenix Open exemption hasn’t really sunk in yet,” said Mueller. “I can’t wait to play in it as it’s such an awesome event and with me growing up here in the valley I have been there a ton of times over the years. Being able to play in it is going to be an awesome experience.”

Downs finished in second place with a total of 203 (-13). His 64 in the final round was tied as the low round for the Championship with Preston Otte, 37, PGA Head Golf Professional at the Highlands at Dove Mountain, who also carded a 64 in the final round that included six birdies and an eagle on the par-4 14th hole. Otte finished tied for seventh place.

Jennifer Tucker, 34, PGA Teaching Professional at Desert Mountain, finished in 37th after making the 36-hole cut. She did capture the inaugural Southwest PGA Woman’s Championship, that was combined with the Section Championship, with a 54-hole hole total of 224 (+8).

“I’m content with the way I played this week,” said Tucker. “I left a lot out there skill wise that I need to go back and work on. I need a lot more good swings to show up then the bad swings that seemed to be more prevalent but overall I’m happy.”

The Waste Management Phoenix Open won’t be the first large event Mueller competed in. He qualified for the 2012 U.S. Open at the Olympic Club in San Francisco, Calif., where he finished tied for 51st place. As a new member of the Southwest PGA, Mueller looks forward to playing with some of the top players in the country in member events.

“I’m happy to be a part of the Southwest PGA and the caliber of players here in the Section is no joke,” said Mueller. “In last month’s PPC (Southwest PGA Professional Championship) I played pretty well all three days and finished at 3-under and got blown away. You have to play really well to finish at the top in this Section. There are just too many good players and you have to be on top of your game.”

About The Southwest Section PGA:
The Southwest Section of the PGA of America is a professional organization serving the men and women golf professionals in Arizona and Southern Nevada who are the recognized experts in growing, teaching and managing the game of golf. The Southwest PGA is responsible for the administration of competitive golf tournaments, junior golf programs and events, educational opportunities, support programs and growth of the game initiatives. With 1239 members and apprentices, the Southwest PGA is the fifth largest of the 41 regional entities or Sections that comprise the PGA of America.  For more information about the Southwest PGA, please visit www.southwest.pga.com and join us on social media at www.facebook.com/swsectionpga and www.twitter.com/swsectionpga .