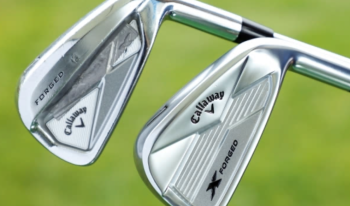 Callaway's X Forged irons have somewhat of a cult following in the equipment industry. The better player model made its debut in 2007 and last saw an update in 2013, but that hasn't stopped several Callaway staffers from continuing to play the iron, including Phil Mickelson.

Based on photos from an Alba story out of Japan, Mickelson and others might not have to wait too much longer for the next installment. According to the article, Callaway's new X Forged will debut in Asia in mid-October with updated grooves and a new cavity-back design.

Callaway Japan has not yet listed the irons on its website, but what many golfers in the U.S. are wondering is if the company will release X Forged in the States at some point.

While Callaway has remained quiet regarding the possibility of a launch, the sheer popularity of the cavity-back iron makes it safe to assume something is in the works.

Tweet
More in this category: « Shots of the Week | 2017 Dell Technologies Championship Mueller Goes Wire-to-Wire and Wins the 60th PING Southwest PGA Championship »
back to top