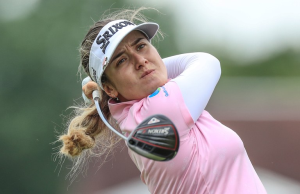 Just two weeks after the first great female golfer from Australia went into the World Golf Hall of Fame, Hannah Green was followed in her final round by the greatest female Aussie golfer ever as she joined those two legends from Down Under as major winners, taking the KPMG Women’s PGA Championship on Sunday at Hazeltine National.

Green’s name now stands along side Jan Stephenson, the three-time major winner inducted June 10 into the WGHOF, and Karrie Webb, another WGHOF member who has seven major titles and who followed Green as she shot a gritty 72 in the final round. It was a satisfying sight for Webb who has mentored Green.

Green’s nine-under-par 279 was one stroke better than defending champion Sung Hyun Park. Fittingly, Green won it with an up-and-down out of the left greenside bunker on the final hole, making a 5-footer for par with the club that saved her time after time this week.

Park, playing in the group up ahead, made an 18-foot birdie putt on No. 18 while Green watched from the fairway. She tugged her hybrid into the left bunker from 182 yards but hit a solid sand shot and then made the putt, the tears of joy that followed belying the calm with which she delivered the winning stroke.

“I'm pretty much speechless,” Green said, tears interrupting her sentences.. “I was really nervous the last five holes and just really -- I made a clutch putt and that was kind of got me through another one. To make the one on the last is really is surreal.”

Mel Reid closed with a 65 to finish at six-under-par 282 along with Nelly Korda in a tie for third. Lizette Salas and Danielle Kang were at 283. Mirim Lee was at 284 with Inbee Park and Hyo Joo Kim. So Yeon Ryu, Lydia Ko, Megan Khang and Ariya Jutanugarn, who started the final round one stroke behind Green but closed with a 77, were at 285.

“I’m so proud,” Webb said. “I caught myself a few times getting ahead of myself for Hannah and choking up thinking what a win would mean for her. I feel like I won a golf tournament. This is one of the best days I’ve had at a golf course in a long time. I could see at the U.S. Amateur [in 2015] that she was made to win LPGA tournaments.”

Green was both amazing and magical all week. The 22-year-old Australian, playing in just her seventh major – as many as Webb has won – and seeking her first LPGA victory, started the day with that one-stroke lead over Jutanugarn and protected it brilliantly as Jutanugarn faded and others charged.

Throughout the week, Green was magical. She holed a bunker shot for birdie on Thursday, holed a 60-yard wedge from the rough to save par on Friday and hit 17 greens on Saturday despite missing eight fairways. Sunday was more of the same and when she did make a mistake her putter was the great eraser than wiped out the errant shots.

But winning majors is not easy and if Green was not feeling the pressure, Webb was. “I’m starting to get nervous now,” Webb said after Green made bogeys on Nos. 9 and 11, slicing her lead to two strokes over Korda and Park. “I think we were more stressed that she was,” Webb said later. “Her maturity today was amazing.”

When Green drove into the thick rough left of No. 12 she could not pull another rabbit out of her hat, making her third bogey in four holes after making only three bogeys in the first three rounds. She made par on the par-3 13th hole then stepped to the 14th tee reeling a bit.

But, like Brooks Koekpa splitting the 15th fairway at Bethpage in the final round after making four consecutive bogeys on his way to winning the PGA Championship in May, Green found the center of the short grass on No. 14, steadying the ship. She knocked it on to 12 feet and, despite missing the birdie putt, walked off with a stress-free par.

She then split the fairway again on No. 15 for another easy par and after yet another perfect drive on the dangerous 16th hole, with water all down the right side, rolled in a 15-footer for a birdie that moved her two clear of Park.

“It's awesome,” said Green, whose mother was watching on TV at home. “ I've always wanted to win in front of an Aussie crowd. I felt even that's what it was like today. Anything to just be winning in majors the first event. I actually didn't feel too nervous the first few.. Obviously I heard Sung made the last one, knew I needed to make par. Didn't want to play that hole again. I'm really happy I made it.”

That set the stage for the dramatics on the 18th green – first Park rolling in her birdie putt and then Green making up-and-down from the bunker. It was the most fitting end to a tournament in which Green led from start to finish, but there was always the feeling the magic could run out.