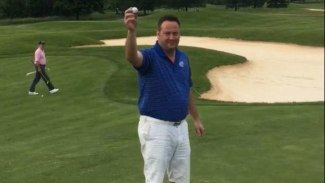 When he hit his first-ever hole-in-one at Hayfields Country Club in Hunt Valley on Wednesday, Michael Thompson was naturally thrilled. When he aced a hole at Massanutten Resort in Stonewall, Va., within a 24-hour span, he was almost speechless.

Tweet
More in this category: « US Open Championship - Who's Your Pick? Quick Look at the U.S. Open »
back to top