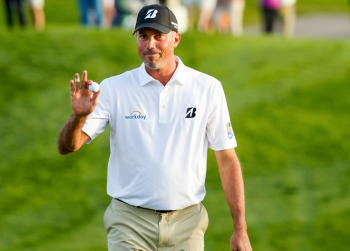 PHOENIX – Seven-time PGA TOUR winner Matt Kuchar, 2009 PGA TOUR Rookie of the Year Marc Leishman and six-time PGA TOUR winner Bill Haas and are among the final players to commit to play in the 2018 Waste Management Phoenix Open Presented by Ak-Chin Indian Community, set to tee it up January 29-February 4 at TPC Scottsdale. A field of 132 players will vie for the $6.9 million purse, the $1,242,000 first-place check and 500 FedExCup points.

The field for next week’s tournament is nearly set as three sponsor exemptions and three qualifying spots are still up for grabs.

Kuchar is a seven-time winner on the PGA TOUR with victories in five of the last eight seasons including the 2012 PLAYERS Championship. He represented the United States on four winning Ryder Cup teams (2010, 2012, 2014, 2016), four Presidents Cup teams (2011, 2013, 2015, 2017) and took home the Bronze Medal during the 2016 Summer Olympics in Rio de Janeiro.
Marc Leishman jumped onto the PGA TOUR circuit in 2009 in which a second-place finish at the BMW Championship and two additional top-10s and eight top-25s was good enough to win PGA TOUR Rookie of the Year honors. Last year was Leishman’s best to date with two wins at the Arnold Palmer Invitational and the BMW Championship on his way to a sixth-place finish in FedExCup standings.

Haas has accumulated six PGA TOUR wins in his 14-year professional career including the 2013 AT&T National, the 2015 Humana Challenge and the 2011 TOUR Championship. Haas was also a member of the victorious United States Presidents Cup teams in 2011, 2013 and 2015.