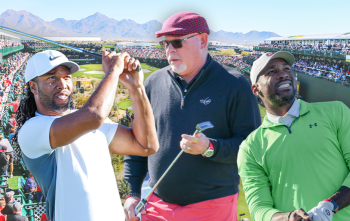 SCOTTSDALE, Ariz. – Arizona Cardinals all-time leading receiver Larry Fitzgerald, former Cardinals head coach Bruce Arians and All-Pro Cardinals cornerback Patrick Peterson have been added to the list of star-studded celebrities from the sports and entertainment world who will be playing in the Annexus Pro-Am at the Waste Management Phoenix Open Presented by Ak-Chin Indian Community on Wed., Jan. 31, at TPC Scottsdale’s Stadium Course.

Arians recently retired as the Arizona Cardinals winningest head coach in their 98-year history, earning his 50th win in the final game of the year against Seattle. Arians has two Super Bowl titles under his belt (2006, 2009) and was named the AP NFL Coach of the Year in 2012 and 2014, the latter coming as head coach of the Cardinals.

Peterson is coming off his seventh season in the NFL, all with the Arizona Cardinals. During his career, Peterson has been named to seven Pro Bowls, named to the NFL All-Pro Team three times (2011, 2013, 2015) and is widely considered one of the top defensive backs in the league.

The trio will join Michael Phelps, Greg Maddux, Emmitt Smith and Tim Brown, who have already committed to playing.

The 2018 Waste Management Phoenix Open Presented by Ak-Chin Indian Community will be held at TPC Scottsdale January 29 – February 4, 2018. “The People’s Open” is the best-attended golf tournament in the world and has gained legendary status for being the most unique stop on the PGA TOUR.  The 2018 edition will mark the 83rd playing of the event (one of the five oldest events on the PGA TOUR) and the ninth as the Waste Management Phoenix Open.