Michael Phelps, Emmitt Smith, and Greg Maddux Among Early List of Celebrities to Appear in Annexus Pro-Am at The Waste Management Phoenix Open 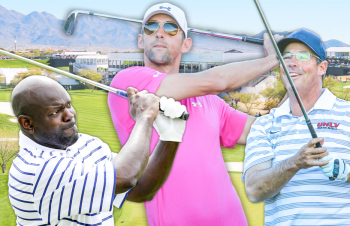 SCOTTSDALE, Ariz. – Michael Phelps, the most decorated Olympian of all time; NFL Hall-Of-Famer Emmitt Smith and MLB Hall-Of-Fame pitcher Greg Maddux are among the early list of star-studded celebrities from the sports and entertainment world who will be playing in the Annexus Pro-Am at the Waste Management Phoenix Open Presented by Ak-Chin Indian Community on Wednesday, Jan. 31, at TPC Scottsdale’s Stadium Course.

Phelps is considered the greatest Olympic athlete of all time thanks in part to his record 28 overall medals, including a record 23 gold medals. His most recent competitive appearance was at the Rio Summer Games, where he added six more medals, including five gold medals, to his record medal count. The Scottsdale resident will be making his third appearance in the Annexus Pro-Am (2013, 2017).

Smith retired as the NFL’s all-time leading rusher with 18,355 yards during his 15-year career with the Dallas Cowboys and Arizona Cardinals. During that time, Smith won three Super Bowls with the Cowboys (1992, 1993, 1995), was named first-team All-Pro four times (1992-1995), and was named the NFL Most Valuable Player in 1993. Smith participated in the 2016 Annexus Pro-Am and won the Phoenix Suns’ Charities Shot at Glory the same year.

Maddux racked up 355 wins as a starting pitcher for four different teams during his 22-year professional tenure, making him one of only 24 pitchers in baseball history to win more than 300 games in a career. Maddux was an eight-time All-Star, a World Series champion with the Atlanta Braves (1995), a four-time Cy Young Award winner (1992-1995) and won 18 Gold Gloves. He was inducted into the MLB Hall of Fame in 2014 on his first ballot.

The 2018 Waste Management Phoenix Open Presented by Ak-Chin Indian Community will be held at TPC Scottsdale January 29 – February 4, 2018. “The People’s Open” is the best-attended golf tournament in the world and has gained legendary status for being the most unique stop on the PGA TOUR. The 2017 tournament broke four attendance records, including a PGA TOUR record 655,434 fans for the week. The 2018 edition will mark the 83rd playing of the event (one of the five oldest events on the PGA TOUR) and the ninth as the Waste Management Phoenix Open.
The Thunderbirds were founded in 1937 with the mission of promoting the Valley of the Sun through sports. The Thunderbirds consist of 55 “active” members and more than 250 “life” members.  In 2017 The Thunderbirds raised a record $10.1 million for charity from proceeds from last year’s tournament and have eclipsed $122 million in charitable giving since its inception in 1932.  For more information on The Thunderbirds, visit www.thunderbirdscharities.org.