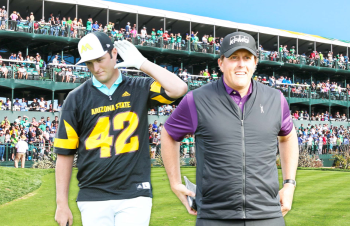 PHOENIX, Ariz. – Three-time WM Phoenix Open champion Phil Mickelson and former Arizona State standout Jon Rahm are among the latest players to commit to the 2018 Waste Management Phoenix Open Presented by Ak-Chin Indian Community, set to tee it up January 29-February 4 at TPC Scottsdale. A field of 132 players will vie for the $6.9 million purse, the $1,242,000 first-place check and 500 FedExCup points.

Additionally, notable commitments were received from three players currently in the Top-50 in the Official World Golf Ranking – Tony Finau (40), Si Woo Kim (41) and Brendan Steele (45).
“Phil is an incredible ambassador for our tournament, and as a three-time winner, one of the crowd favorites every year,” said Tournament Chairman Carlos Sugich. “We’re also thrilled to welcome back Jon Rahm, a four-time NCAA All-American and rising young star on the PGA TOUR.”

Mickelson will be making his 29th appearance at the Waste Management Phoenix Open and is the all-time WM Phoenix Open money leader with $3.9 million in winnings.  Along with his three WM Phoenix Open wins, Mickelson has finished in the Top-10 in 10 of his 28 starts at TPC Scottsdale.  With a win in 2018, Mickelson would become the only player in tournament history to win the event four times.  He currently ranks 37th in the Official World Golf Ranking.

Rahm ranks fourth in the OWGR and claimed his first PGA TOUR victory during the 2017 season with a win at the Farmers Insurance Open. His stellar rookie campaign included two runner-up finishes, two third-place finishes and 11 top-10s; and he finished the year strong with Top-10 finishes in his final four events of the season to finish fifth overall in the final FedExCup standings. Rahm will be making his third appearance at the WM Phoenix Open – he finished T16 in 2017 and T5 in 2015 playing as an amateur on a sponsor exemption.