Timeline: A Look Back at Tiger Woods' Return To Golf After Car Crash 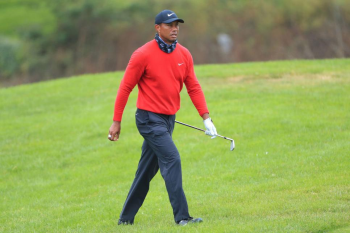 After coming back into the public eye at the Hero World Challenge for the first time since his Feb. 23 car crash, Tiger Woods will return to competition for the first time in over a year with his son, Charlie, at the PNC Championship.

It's been a long road back for Woods, even before he suffered comminuted open fractures to the upper and lower sections of his right leg in the crash, which almost resulted in amputation. Here's a look at his path back.

Nov. 15, 2020: Tiger's most recent PGA Tour start at his long-awaited Masters title defense, which was delayed seven months because of the COVID-19 pandemic. After a final-round 76, Woods finished T-38.

Dec. 20, 2020: The world was captivated by the bond Woods and Charlie showed while playing alongside each other at the PNC Championship en route to finishing seventh.

Jan. 19, 2021: Woods announced he had undergone a fifth microdiscectomy procedure on his back to remove a “pressurized disc fragment” that caused him discomfort during the PNC Championship. Woods planned to skip at least the Farmers Insurance Open and Riviera's Genesis Invitational, of which he is the tournament host.

Tweet
More in this category: « All the Best Shots from Hero World Challenge | 2021 Limited Number of Premium “Platinum” Tickets for Concert in the Coliseum to Go on Sale at 10 A.M. on Thursday, Dec. 2 | Waste Management Phoenix Open »
back to top