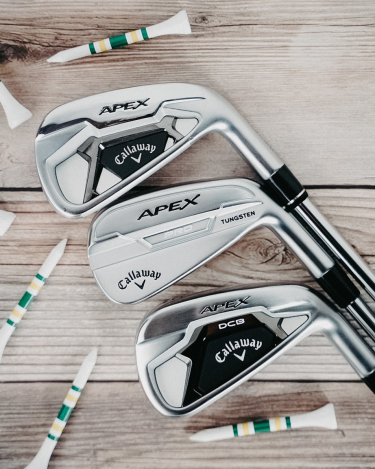 Everyone wants to hit the ball like a tour pro. This extends from booming drives to precisely struck, soaring iron shots that settle close to the pin.

That said, the irons TOUR pros play are rarely, if ever, the best-suited weapons for average amateurs as they wage war with old man par (as much as they attempt to convince themselves otherwise).

Xander Schauffele and Jon Rahm, for example, play Callaway’s Apex TCB irons. At the “elite player” end of the Apex 21 cavity back iron spectrum, TCB (Tour Cavity Back), irons feature a more compact shape and TOUR pro-preferred look at address as well as a weighting system more conducive to the needs of the best golfers in the world.

On the other end of Callaway’s Apex 21 lineup is an iron similar in name but packed with technology for a very different player: the Apex DCB (Deep Cavity Back). The DCB is built for a player who needs more forgiveness but who still wants to play a forged club. It’s an iron that shares the same soul as the Apex TCB Jon Rahm played en route to his U.S. Open win, but it’s presented in a package much more beneficial to an 18-handicapper who is pursuing club championship or Tuesday night league glory.

“What’s interesting is that the TCB and DCB are two ends of the Apex offering, but they share the same forged DNA. The Tour Cavity Back is our most popular Tour iron, with a compact shape that still provides some forgiveness. Whereas the Deep Cavity Back, or DCB, is a game improvement model for players who want forged performance but also need extra help, particularly in the long irons.” - Dave Neville, Senior Director, Brand & Product Management

For more on the specifics of each of these models, and which one is right for your game, check out a detailed breakdown below.

Apex MB
The new Apex MB iron from Callaway features a slight offset decrease compared to its 2018 predecessor, along with a brushed satin finish, a slight reduction in the top line, modified height in the toe, and a weighting port in the back of the club.

Forged from 1025 carbon steel with a classic blade shape, the clubhead also contains a slightly narrower sole and less offset than the 2018 version, while the clubs' 20V grooves are designed to provide optimal spin control in and out of the rough to prevent unwanted fliers.

The visible removable weight at the back of the club allows swing-weight changes to be made without altering the center of gravity location, a feature that the stronger player will appreciate.

The brushed finish of the iron also helps to reduce glare compared to its predecessor.

Played by 2021 U.S. Open Champion Jon Rahm, the clubs feature a thin topline and narrow sole along with a premium satin finish.

Internal and also external metal injected molded tungsten weighting in the Apex TCBs aims to provide precise shot control through the entire set, while the clubs also offer the opportunity to alter the CG (center of gravity) for the best players who want and need to fine-tune their game.

The internal tungsten weighting system goes all the way up to 90 grams in the 7-iron to ensure greater launch characteristics while simultaneously improving forgiveness, while the irons also incorporate Callaway’s urethane microsphere injection, which is designed to fine-tune feel and sound.

The club contains a compact players profile that contains just a hint of offset, a thin topline, and a players sole that has been designed to provide optimized turf interaction.

Apex
With an A.I-designed Flash Face Cup, the Callaway 21 Apex irons are designed to provide high ball speeds and increased spin robustness across the face. At the same time, the 100% forged body and proprietary urethane microspheres aim to deliver optimal sound and feel at impact.

The new 2021 Callaway Apex Forged incorporates five times the tungsten as its previous version (up to 64 grams in the 9-iron). Combined with Callaway’s urethane microsphere injection, this creates an iron that gives you that crisp forged iron feel, all while giving you the help you need across the face of the club.

An extensive Tungsten Energy Core has been designed to offer a club with excellent forgiveness, while the enhanced shaping of the 2021 Callaway Apex irons also seeks to provide golfers with improved turf interaction.

Apex DCB
The Apex DCB irons are for those wanting the Apex Forged experience but with a bit of added forgiveness, combining the look, feel, and performance of a forged players club with the forgiveness of a deep cavity back.

The deep cavity back design and enhanced sole width aim to promote easy launch and solid turf interaction out of various lies. The irons are engineered with an A.I.-designed Flash Face Cup and up to 50 grams of tungsten per iron in order to maximize launch and forgiveness on off-center hits.

The club's profile features a bit more offset, a thicker top line, a wider sole, and a longer blade length in design to combine added forgiveness with greater speed.

Tweet
More in this category: « Golf is Hard | Awkward Bunker Shots Golf Rules Quiz - 8 Questions to Test Your Knowledge »
back to top