Brooks Koepka Not 100% Healthy but 'Months' Ahead of Schedule 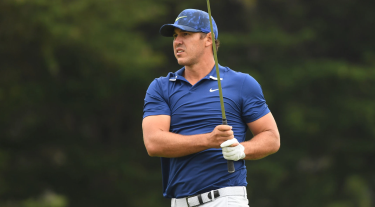 And though he said Wednesday at the AT&T Byron Nelson that he’s still not 100% healthy, he’s still months ahead of schedule after injuring his right knee in a freak accident in March.

That Koepka was even able to compete at the Masters defied the opinion of most medical experts. He underwent surgery in mid-March to repair a dislocated kneecap. Less than a month later, he was walking one of the hilliest courses of the year, gutting out rounds of 74-75 to miss the cut – snapping a streak of 24 consecutive made cuts in the majors.

Afterward, Koepka said it was “tough to say” whether he’d play again before next week’s PGA but that he definitely wouldn’t miss the year’s second major. He felt well enough apparently to tee it up this week at TPC Craig Ranch, where he played the second stage of Q-School in 2012 (and missed out, sending him to Europe for a few years).

Koepka described himself in a “completely new place now” but added that he’s not completely back to normal: He said he still can’t squat into position to read putts and occasionally doesn’t load on his right side throughout the swing with his longer clubs.

“Months ahead of schedule,” he said, “so it’s just nice to be back out and being able to play golf and actually hit shots that I want to hit, unlike I was doing at Augusta.”

Tweet
More in this category: « Lesson Learned: The Walker Cup Reminds Us of What Makes Team Golf Great Golf is Hard | Wells Fargo 2021 »
back to top