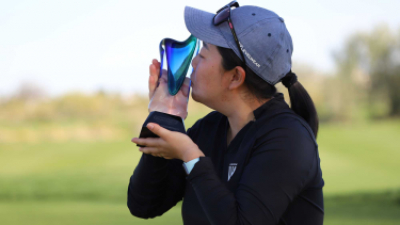 After 72-holes, Ruixin Liu and Rose Zhang both finished 17-under par. The first playoff-hole both would make par. Back to the tee, Liu and Zhang found the fairway again. But Zhang’s second shot found the desert left of the fairway and she would have to take an unplayable, while Liu found herself on the green in three and sunk her birdie putt.

“Obviously she is well known and a really good player so there was definitely pressure,” said Liu. “It was also my first time ever playing in a playoff, which is a lot of pressure in itself too. I am just glad I was able to pull it off with a birdie on the second playoff hole.”

Thanks to the $30,000 payday, Liu climbs to No. 1 in the Race for the Card. In 2018, she claimed three wins and ended the season at the top of the money list. Liu hopes to build off what she learned from that experience, as well as the 2019 LPGA Tour season, to find her way back to a full LPGA Card.

“This is a really good start to the season for me. I am just trying to do my thing, keep my pace, and be patient,” said Liu. “If I could get my full LGPA card back that will be the second time I play on the Tour. I really just want to see improvement in myself and I feel like I have seen that over the last few years.”