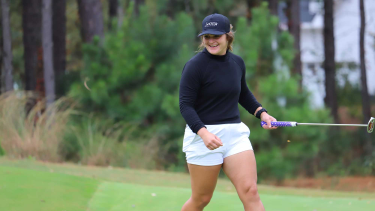 MESA, Ariz. — The first stop on the 2021 “Road to the LPGA” takes the Symetra Tour to Longbow Golf Club in the Grand Canyon State for the inaugural Carlisle Arizona Women’s Golf Classic from March 18-21.

Action gets underway at 7:00 a.m. local time all four days with play starting off No. 1 and No. 10 tees for the first two rounds and No. 1 for the third and final rounds.

Nine individuals with ties to Arizona institutions for higher education are featured among the competition in the Grand Canyon State and are names to keep an eye on once the event starts on Thursday.

“Playing in Arizona is like coming back home for me. It’s a very special place not only because I went to college there, but also because of all the great people I met during my time there and still keep in touch,” said Llaneza. “I am very excited to start the season in Arizona. Go Wildcats.”

COUNTRIES (AND STATES) OF THE CARLISLE ARIZONA WOMEN’S GOLF CLASSIC

A total of 33 countries are represented this week at the Carlisle Arizona Women’s Golf Classic, led by the United States with 62 players, followed by the Republic of Korea with eight and both Sweden and Canada with seven competitors each.

“While it has always been a great honor to represent Canada, now more than ever I hope I can make Canadians proud both on and off the course,” said Maddie Szeryk (London, Ontario).

Individuals from 25 different states are also set to tee it up at Longbow Golf Club. California leads with the most players in the field at 14, while three players are from the host state.

“I’m very excited to kick off the season at Longbow Golf Club. I’ve had a lot of great memories here, from qualifying for the LPGA Tour Founder’s Cup to a top-five finish on the Symetra Tour a few years ago,” said Kyung Kim (Chandler, Arizona). “I’m definitely looking forward to a fun week and for the season to get started.”

ROOKIES IN THE GRAND CANYON STATE

Numerous professionals in their rookie season on the Symetra Tour have made the trek to Maricopa County, as 15 rookies are in the field and eager for the first event of the Symetra Tour season.

Among them is Karoline Stormo (Tvedestrand, Norway) who finished in a tie for sixth at her professional debut at the 2020 Four Winds Invitational in South Bend, Ind. In 2019, she was named the Mid-American Conference (MAC) Golfer of the Year and earned All-MAC First Team honors while playing for Kent State University. Not only did she claim individual medalist honors, but she made history with the program as her team secured its 21st consecutive MAC Women’s Golf Championship.

“The off-season has been good, but I am so excited to start playing tournaments again and compete in the Carlisle Arizona Women’s Golf Classic this week,” said Stormo. “I only got to play a few events last summer, so I don’t feel like I really got to see what the professional life was all about. This makes me even more thrilled to get the season started.”

RACE FOR THE CARD UPDATE

The Symetra Tour annually awards LPGA Tour membership to the top players on the Race for the Card money list at the end of the season and will usher in the next graduating class at the conclusion of the 2021 season.

From 1999-2002, the official qualifying tour of the LPGA handed out three cards. Then from 2003-2007, that number increased to five before 10 were distributed starting in 2008. Since the inaugural year, a total of 162 players have graduated to the big stage.

Tweet
More in this category: « Rory McIlroy: What's in the Bag, 2012 The Honda Classic 11 Driving Range Mistakes »
back to top