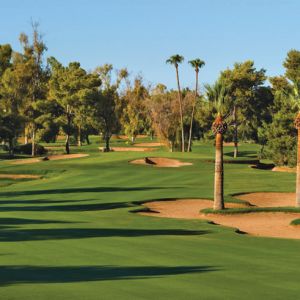 LITCHFIELD PARK, Ariz. (June 26, 2015) – With a steadfast commitment to continued enhancement of the legendary Gold Golf Course, JDM Partners, owners of Wigwam Arizona, are renovating the bunkers in addition to making course condition improvements of the “Arizona Monster,” nicknamed as such for its well-known degree of difficulty.

The project is being done in collaboration with Tom Lehman, former British Open champion and winner of numerous PGA TOUR events, and will involve a complete renovation of the bunkers. Work will begin Monday, July 6 and is expected to be completed within eight weeks. Though the Gold Golf Course will be closed during this time, both The Patriot and The Heritage courses at the Wigwam Golf Club will remain open.

Designed by Robert Trent Jones, Sr., the fabled Gold Course is celebrating its 50th anniversary and over that time has played host to numerous signature tournaments such as the U.S. Open Qualifier, several NCAA Regional Championships and the annual Patriot All-America Invitational, one of the top amateur competitions in the world. The 7,400 yard, par 72 course has received numerous industry awards and accolades since opening in 1965, including “Top 100” golf courses in America.

“We are dedicated to improving this already incredible golf course and with Tom Lehman’s assistance the Gold Course will continue to stand among the nation’s finest,” said Leo Simonetta, director of golf. “Ultimately, the course will become more playable for the average golfer while continuing to challenge even the most accomplished player.”

The historic Wigwam Resort opened in 1929 and is set on 440-acres of lushly landscaped desert. Blending casual elegance with the charm of the Southwest, the resort features luxury casitas and suites, a variety of award-winning restaurants and full array of recreational amenities, including pools and a spa and tennis courts. Located just north of I-10 off Litchfield Road, The Wigwam is 20 minutes from downtown Phoenix. For more information, visit
www.wigwamarizona.com

The Wigwam’s three 18-hole championship golf courses offer a diversity that cannot be matched by any other Arizona resort. Here, the golf enthusiast has their pick of not just one or two courses, but three 18-hole courses – 54 holes of championship golf including two courses designed by the legendary Robert Trent Jones, Sr. And, in true Wigwam style, each course – The Gold, Patriot, which are celebrating 50 years of golf, and Heritage – offers a unique challenge that adds spice and variety to one’s stay at this timeless and relaxing retreat. In December 2009, The Wigwam was purchased by JDM Partners, led by sports icon Jerry Colangelo. Two years later, the resort unveiled the completion of a $7 million rejuvenation project and re-launch under its original name – The Wigwam. For more information, please visit www.wigwamgolf.com.