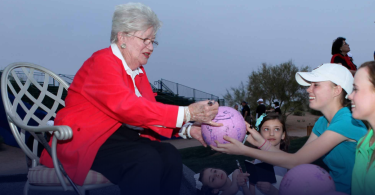 After a decade of being hosted at PebbleCreek's Tuscany Falls Golf Course in Goodyear, Arizona, during the fall, the annual Marilynn Smith Scholarship Pro-Am is switching its location to Phoenix and its date to March for next year's edition.

It will be the first Marilynn Smith LPGA Charity Pro-Am to be held since LPGA Founder and Hall of Fame member Marilynn Smith passed away on April 9 this year, just four days shy of her 90th birthday.

"We are thrilled that the 2020 Pro-Am will be an elevated experience, including LPGA Tour players in the field, supporting Marilynn's vision, as well as a Sunday Tea with player interviews by veteran golf writer Ron Sirak," said Scott Wood, Tournament Director of the Bank of Hope Founders Cup.

LPGA Commissioner Mike Whan paid tribute to the massive impact made by Smith through her Charity Pro-Am and her Scholarship Fund.

"At the LPGA our motto is 'Act Like a Founder' – which means do whatever it takes to leave the game BETTER for the next generation of golfers," Whan said. "There is no greater role model for our members than LPGA Founder Marilynn Smith. Her passion for the game and for the LPGA were unequaled. Even in her retirement, Marilynn continued to serve as an example to all players and teachers. Through her Charity Pro-Am and her Scholarship Fund, she has created opportunities for young women in the U.S. to further their education. What a legacy of life-changing impact - I'm so proud of Marilynn Smith!"

Smith was a supreme advocate for women's golf during her playing career and throughout her retirement. Her impact on the game as one of the 13 pioneering women who founded the LPGA in 1950 is immeasurable, as was her impact on every single person she met during her remarkable lifetime. Nicknamed 'Miss Personality' by her fellow Founders because of her ultra-friendly nature and her outgoing presentations on behalf of women's golf, Smith received the first Patty Berg Award for distinguished service to women's golf; was awarded the Golf Digest LPGA Founder's Cup for her dedication to charitable services; served as LPGA president from 1958-1960; helped start the LPGA Teaching and Club Professionals (T&CP), along with fellow Founder Shirley Spork; and was inducted into the World Golf Hall of Fame in 2006.

Smith's golf pedigree was equally impressive. She established herself among the biggest names in the game and ended a glittering professional career with a total of 21 victories on the LPGA Tour, the first coming at the 1954 Fort Wayne Open and the last of them at the 1972 Pabst Ladies Classic. Included in that tally were two major championship crowns, the 1963 Titleholders and the 1964 Titleholders.

LPGA Tour player Caroline Inglis, who as an amateur became the first golfer in Oregon program history to be named the Pac-12 Individual Champion (2014-15), said: "I was lucky enough to receive a Marilynn Smith Scholarship during my freshman year at the University of Oregon while playing on the women's golf team. When I heard that I had been awarded the scholarship, I was overjoyed. It could not have come at a better time in my life, as my Dad had just been diagnosed with Leukemia.

"The financial support helped my family during a difficult time and allowed me to attend a great university and pursue my dream of becoming a professional golfer. During my four years at University of Oregon, I was able to learn, grow and develop into the golfer and person that I am today. I will be forever grateful to Marilynn and The LPGA Foundation for helping me turn my dreams into reality."

For businesswoman Michele Schambs, a major benefit of the Marilynn Smith Scholarship was that it allowed her to focus on both collegiate golf and also her academic career.

"Golf is a game that can teach you valuable lessons, and the importance of diligence," Schambs said. "I entered my first competitive tournament at 14 and found out I had to work even harder to be able to play with the steep competition. Another driving force was that I was the only girl on a boy's high school golf team. Because I couldn't hit my drive as far off the tee as the boys, I had to work on improving my distance and developing my short game. Without these driving forces, I would not have been able to continue my golf career in college.

"Golf is the game that helped make me the woman I am today. It has taught me confidence, diligence, honesty, integrity and much, much more. These qualities can transfer to not only your career but to your daily lives. These are great qualities to teach our younger generation."

Marilynn Smith founded the scholarship fund in 1999 as a result of the lack of funds available to her while playing golf at the University of Kansas. In 1949, Marilynn competed in the Women's National Intercollegiate Golf Tournament. Her father asked the KU athletic director, Phog Allen, for travel expense money to play in the tournament. He said: "Mr. Smith, it's too bad your daughter is not a boy." This incident was the catalyst for Marilynn to establish a scholarship fund to help other young women golfers attend college. Thus far, 189 scholarships have been awarded, totaling $988,000.

Tweet
More in this category: « Volvik Announced as Title Sponsor of 10th Annual Founders Cup Cheap VS Expensive Putter Test »
back to top