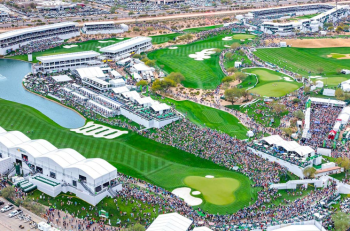 For the second consecutive season, the Waste Management Phoenix Open was named the PGA TOUR “Tournament of the Year,” marking the fourth time (2014, 2015, 2018 and 2019) in the last six years the event has taken top honors. The Phoenix-area tournament also won the “Best Integrated Marketing” award for its engaging and creative year-round integrated marketing plan.

“On behalf of the PGA TOUR, I am thrilled to congratulate the Waste Management Phoenix Open on once again being named the ‘Tournament of the Year,’” said PGA TOUR Chief Tournaments and Competitions Officer Andy Pazder. “The Thunderbirds and title sponsor Waste Management continue to reach new heights each year with an unparalleled fan experience, seamless title sponsor integration and record charitable impact, all while continuing their mission as a zero-waste event.”

The 2019 Waste Management Phoenix Open, won by Rickie Fowler, continued to reach new levels with its fan experience, marketing and social media strategy, and charitable impact. In recent years, the tournament has enhanced the overall experience for general admission holders, adding and expanding public venues along the closing stretch of holes at TPC Scottsdale, beginning with its famous coliseum-style 16th hole. As part of a sold-out, four-night concert series, more than 38,000 fans enjoyed 11 musical acts, with headliners including Old Dominion, Jake Owen, The Chainsmokers and Snoop Dogg.

Working closely with the PGA TOUR, Skratch and Golf Channel, the tournament reached new audiences with engaging content through the “Legends of the Green” campaign, celebrity influencers and an unforgettable moment shared between 2018 Waste Management Phoenix Open champion Gary Woodland and Special Olympics golfer Amy Bockerstette. More than 50 million people have since watched Amy, who has Down Syndrome, sink a par putt on the 16th hole during a practice round with Woodland, making it one of the most viewed Facebook videos in PGA TOUR history. The moment has been covered by all major sports and news outlets, and garnered new attention when Woodland won the 2019 U.S. Open and reunited with Amy on the TODAY Show.

“We’re extremely proud to be acknowledged by the PGA TOUR in back-to-back years and we want to say thank you to our fans, sponsors and the community for their commitment to our event,” said Chance Cozby, 2019 WM Phoenix Open Tournament Chairman. “The Thunderbirds could not achieve this success without the tireless effort of so many involved, starting with our title sponsor Waste Management. Our goal each year is to make the Waste Management Phoenix Open better than the last so we can continue to grow our charitable give to the Valley of the Sun.”

“Since Waste Management became title sponsor in 2010, we are proud of the positive impact the Waste Management Phoenix Open continues to bring to benefit the community and the environment,” said Jim Fish, President and CEO of Waste Management. “Together, with our partners The Thunderbirds, we strive to find new ways to improve one of the top sporting events in the world, and this recognition acknowledges our collaborative effort. We’re thrilled to be the title sponsor of this event for the next decade to come.”

The 2020 Waste Management Phoenix Open, won this year by Rickie Fowler, will be held January 27 – February 2 at TPC Scottsdale.

The PGA TOUR, headquartered in Ponte Vedra Beach, Florida, co-sanctions more than 130 tournaments on the PGA TOUR, PGA TOUR Champions, Korn Ferry Tour, PGA TOUR Latinoamérica, Mackenzie Tour-PGA TOUR Canada and PGA TOUR Series-China. Members on the PGA TOUR represent the world’s best players, hailing from 28 countries and regions (93 members are from outside the United States). Worldwide, PGA TOUR tournaments are broadcast to 226 countries and territories in 23 languages. Virtually all tournaments are organized as non-profit organizations to maximize charitable giving. In 2018, tournaments across all Tours generated a record $190 million for local and national charitable organizations, bringing the all-time total to $2.84 billion.