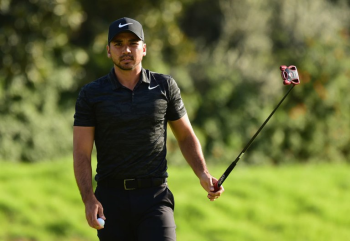 Jason Day expects he’ll be praising Brooks Koepka’s layup game as the pair get closer to the par-5 16th at TPC Southwind this week.

The 530-yard hole will be a pivotal one in the World Golf Championships – FedEx St. Jude Invitational, but also doubles as the site for a potential $1 million showdown.

The pair are in a battle with Dustin Johnson, and potentially a few others, for the season long Aon Risk Reward Challenge – worth $1 million to the winner.

Paired with Day over the opening two rounds, Koepka laughed that he won’t fall for the Australian’s reverse psychology and has his driver, along with his verbal jab game, warmed up if he needs it.

While Ian Poulter, Jason Kokrak, Justin Thomas, Alex Noren, Gary Woodland and Cameron Smith all have mathematical chances of winning over this week and next, the odds suggest a three-man showdown in Memphis.

The Aon Risk Reward Challenge has seen players on the PGA TOUR (and LPGA Tour) record their best two scores on the designated hole of the week throughout the season and an average-to-par calculated.

Players must have played 40 rounds at the eligible events to qualify, a feat Day and Koepka have already achieved, while Johnson will hit that mark this week.

Tweet
More in this category: « Tiger Misses Cut at The Open, Cites Lack of Consistency WGC-FedEx St. Jude Invitational Preview »
back to top