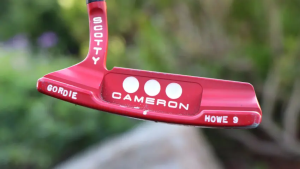 Even idols have idols. Wayne “The Great One” Gretzky, the leading scorer in NHL history, has a custom Gordie Howe-themed Scotty Cameron putter in his bag at the 2019 AT&T Pebble Beach Pro-Am; he calls the putter “one of the greatest things I’ve ever had in my life.” The late Gordie “Mr. Hockey” Howe -- who wore No. 9 -- is a hall-of-fame hockey player who played for the Detroit Red Wings for 25 years. Although Gretzky went onto break many of Howe’s records, Gretzky says, “I idolized and loved Gordie so much ... we were good friends.”

Gretzky says he received a Gordie Howe jersey for Christmas when he was 6-years old, and he “was a huge Red Wings fan growing up.” Now, Gretzky is playing with one of Howe’s putters.

As he tells the story, Gretzky was playing Sherwood Country Club in a fivesome two years ago when his group called a twosome playing behind his group to play-through. One of the “gentlemen” in the group was using a red putter. “I didn’t know it was Gordie’s putter, and I said ‘Gosh I love your putter,’” said Gretzky. The gentleman said, “Oh, it’s a Gordie Howe putter.” The next day, Gretzky says the gentleman sent him the putter.

After receiving the putter, however, Dustin Johnson -- his daughter Paulina’s fiancée, current Pebble Beach Pro-Am partner, and 19-time PGA TOUR winner -- said the putter was “a little bit light.” Johnson took the putter and said, “I’m going to make it a little bit heavier for you, that’d be better for you.”

Gretzky has been using the weight-adjusted putter for two years now, and by the way he speaks of the putter, it doesn’t sound like it’s coming out of the bag anytime soon.

“It’s one of the favorite things I have in my life, because I idolized and loved Gordie so much,” Gretzky said. “[Gordie] would be killing himself laughing that I’m using his putter. But it’s so special that I have his putter. I really like it … oh my gosh, this is one of the greatest things I’ve ever had in my life. I keep getting more excited. Oh my gosh, it is so special for me. I idolized him, and we were good friends. Pretty special.”

To keep the putter safe, Gretzky has a “GHS” putter cover, which stands for Gretzky Hockey School. He and his son Ty founded the school in 2014 for “growth and development of youth hockey players,” according to its website. Gretzky also has the school’s logo stitched on his Vessel-G/Fore custom golf bag.

Additionally, Gretzky has “99” -- the jersey number he wore throughout his career, which is now retired throughout the NHL – stamped on his TaylorMade wedges and Wilson C100 irons (notice the toe portion of his irons).

After playing the Monterey Peninsula Country Club Shore course on Thursday, Johnson and Gretzky are in T25 (7 under) as a team.