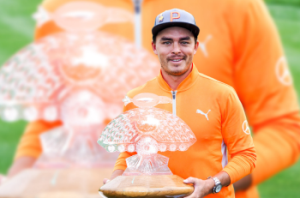 The 2019 Waste Management Phoenix Open is in the books, and perennial contender and two-time runner up Rickie Fowler finally found his way to the winner’s circle at TPC Scottsdale. And with his gutsy performance today, Rickie Fowler becomes The People’s Champion. This is Fowler’s fifth win on the PGA TOUR and his first since the 2017 Honda Classic.

Fowler took a four-shot lead into Sunday’s final round but faced early adversity with a double bogey on the par-4 fifth followed by a triple bogey on the par-4 11th as a result of a rare and bizarre ruling. After chipping into the water on his third short, Fowler placed his ball on a severe slope, and due to the damp conditions from persistent rain showers, the ball once again rolled into the water. Once Fowler placed the ball, it was considered in play, and he was assessed a penalty stroke. He carded a seven on the 11th hole then bogeyed the 12th before finding two birdies on 15 and 17 to take a two-shot lead into the 18th. Fowler made par on the finishing hole to win by two strokes, shooting 17-under 267 for the tournament.

“Yeah, this one is a little more special. It’s not just a normal event,” said Fowler talking about his runner-up finishes in previous tournaments. “I love the atmosphere here. I love the fans. They have always been great to me. The Thunderbirds have been nothing short of amazing to me.”

On behalf of The Thunderbirds, title sponsor Waste Management and the PGA TOUR, the Waste Management Phoenix Open would like to extend an enormous thank you to our volunteers and, of course, the very best fans in golf. Thank you for an outstanding tournament! Check out the Sunday highlights!