Scott Piercy Shoots 65 to Lead CJ Cup, with Brooks Koepka One Back 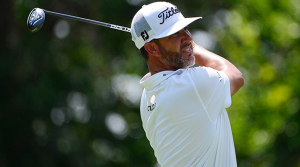 JEJU ISLAND, South Korea — Brooks Koepka, recently named the PGA Tour player of the year, gave himself the perfect opportunity to become the No. 1 player in the world when he shot a 7-under par 65 to move to within one shot of the lead in the CJ Cup on Friday.

At the Nine Bridges course, the three-time major champion made an eagle on his closing hole to finish on 8-under par 136 after two rounds, just one stroke behind Scott Piercy, who was bogey-free in matching Koepka's 65.

With the wind subsiding and the course playing much easier than on the opening day when the scoring average was 73.26, 44 players — more than half the field of 78 — had under-par rounds.

Tweet
More in this category: « Bunker to Bunker "Legends of the Game" Inside the Ropes Experience Win Probabilities: The CJ Cup at Nine Bridges »
back to top