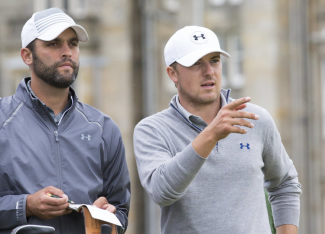 Surely you've heard of Jordan Spieth, the three-time major champion who's currently ranked No. 9 in the world. But who is his caddie, Michael Greller?

The former math teacher who used to caddie in his free time first carried Spieth's bag at the 2011 U.S. Junior Amateur at Gold Mountain Golf Club, where Spieth won -- and the rest is history.

Credit Justin Thomas for setting up the pair after Greller caddied for Thomas at the 2010 U.S. Amateur. Thomas then recommended Greller to Spieth the following year.

Tweet
More in this category: « Bryson DeChambeau wins The Northern Trust, Makes Case for Ryder Cup The 7th Annual Bunkerville Fall Frolic Presented by Mercedes-Benz of Scottsdale »
back to top