Quick look at a Military Tribute at The Greenbrier 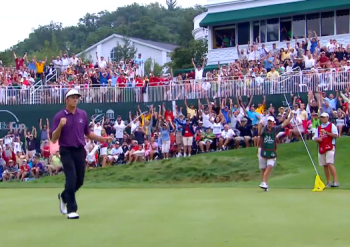 Check out the top 10 moments from A Military Tribute at the Greenbrier Classic including Xander Schauffele's first career PGA TOUR victory and Stuart Appleby's historic final-round 59.

From Tony Finau’s perspective, it’s not a matter of it. Just when.

It’s been more than two years since the big-hitting Finau broke through with his first PGA TOUR win, beating Steve Marino in a playoff at the Puerto Rico Open. Given his length off the tee and the continued development of other parts of his game, it seemed only a matter of time until his second win.

This week’s event, a Military Tribute at The Greenbrier, will be his 65th start since that first victory. Finau has 15 top-10 finishes, including a pair of runner-ups this season, but he’s still waiting for that second victory. No need to press the urgency button, though.

Tweet
More in this category: « Xander Schauffele looks for continued PGA Tour success at The Greenbrier Top 10 Golf Irons 2018 »
back to top