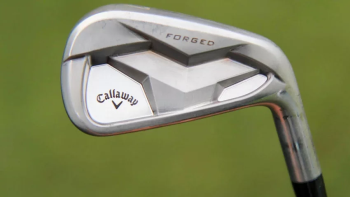 Xander Schauffele opened the Travelers Championship with a 3-under 67 using TaylorMade P750 irons. But it was the set he didn't have in play that had equipment enthusiasts talking this week.

Normally a set of iron on TOUR is a heavy-handed hint that something new is in the retail pipeline. Only this particular cavity-back iron comes on the heels of Callaway's release of Epic Pro and an updated X Forged that both fit the requirements of a better player or professional.

Even more curious was the fact that Schauffele was the only player in the field at TPC River Highlands testing the iron.

So what's the deal with the prototype?

According to Schauffele, who spoke to PGATOUR.COM via text, he recently started working with Callaway to create a particular iron profile that fit his specific needs.

"[The prototypes] don't have a name but the differences are simple," Schauffele said. "A little smaller top line. A little less offset and maybe less bounce than [Callaway's] other irons."

Schauffele described the irons as "pure" but said he wasn't ready to put them in play at Travelers. The plan is to continue working with them and make the switch official later this year.

The two-time TOUR winner signed with Callaway at the beginning of the year but has played a full set of TaylorMade P750's — the same irons he used to win the TOUR Championship and Greenbrier Classic — since the Sentry Tournament of Champions. He recently added a Callaway Epic Pro 3-iron to the bag.

The forged prototypes have minimal offset and a thick piece of metal in the cavity that most likely improves feel. For now, the only set belongs to Schauffele. Whether it goes beyond TOUR is anyone's guess.

Tweet
More in this category: « Why You Should Try Jordan Spieth's Cross-Handed Putting Technique What's the Best Golf Celebration Ever? »
back to top