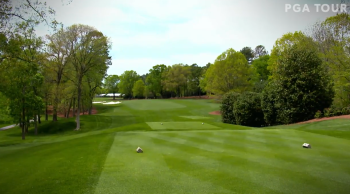 Sam Snead and Tiger Woods are the two winningest golfers in PGA TOUR history. But while Snead cleaned up in North Carolina, posting 10 of his career 82 wins in the state, Woods counts just one win in the Tar Heel State among his 79 victories.

It came in 2007 at Quail Hollow, the Charlotte course he will play again this week at the Wells Fargo Championship. Shooting a final-round 69 that matched the low round of the day – and included a 57-foot eagle putt on the seventh hole -- Woods won by two strokes over Steve Stricker in a season that would eventually end with him winning the inaugural FedExCup.

Tweet
More in this category: « Team Golf Isn't Just for the Pros -- You Should Try It, Too Golf Advisor Expands Travel Content To Better Serve The Avid Traveling Golfer »
back to top