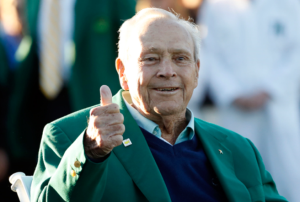 The King won the inaugural Heritage Classic in 1969 at the age of 40 and it was so long ago the pictured lighthouse is a mere skeleton of a structure under construction. If his grandson, Clemson alum Sam Saunders, can become the second family member to win the now RBC Heritage, the fabled lighthouse overlooking the 18th would again feature a different look. The tower is currently wrapped in tartan to honor the event's 50th anniversary.

Tweet
More in this category: « The Perks and Pressures of the Modern Tour Caddie Braden Grace Sets Major Goal »
back to top