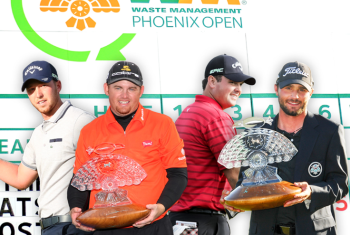 “We’re thrilled to welcome back two former champions, a Ryder Cup star and one of the best up-and-coming players on the PGA TOUR,” said Tournament Chairman Carlos Sugich. “Nearly half of the top 50 golfers in the world are coming to our event. That’s really special, and something we’re very proud of.”

Berger – who won the PGA TOUR Rookie of the Year in 2015 – enjoyed a lucrative 2017 season in which he carded six Top-10 finishes including a successful title defense at the 2017 FedEx St. Jude Classic and two second-place finishes at the World Golf Championships-HSBC Champions and the Travelers Championship. He currently ranks 29th in the Official World Golf Ranking.
Holmes has four PGA TOUR victories under his belt including the 2006 and 2008 WM Phoenix Open. He was also part of two victorious U.S. Ryder Cup teams in 2008 and again in 2016, and also was a member of the winning U.S. Presidents Cup team in 2015.

Reed carded 15 Top-25 finishes last year including four Top-10s and a T2 finish at the PGA Championship on his way to a 22-place finish in the FedExCup. Additionally, Reed has been a part of two winning U.S. Ryder Cup teams (2014, 2016) and a winning U.S. Presidents Cup team in 2017. He currently ranks 25th in the OWGR.

Former WM Phoenix Open Champion Stanley, picked up his second PGA TOUR victory during the 2017 season with a win at Quicken Loans National. Additionally in 2017, Stanley carded five top-10 finishes on his way to a top-25 FedExCup finish.