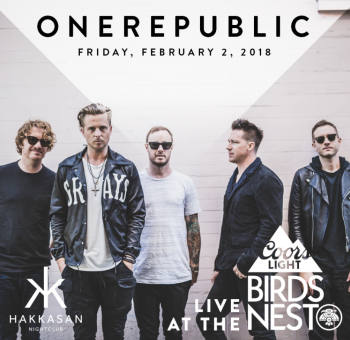 TICKETS FOR GENERAL PUBLIC ARE ON SALE NOW

SCOTTSDALE, Ariz. – GRAMMY-nominated American pop-rock quintet OneRepublic is the latest lineup addition to the Coors Light Birds Nest – the popular entertainment venue at the Waste Management Phoenix Open Presented by Ak-Chin Indian Community. OneRepublic is making its first appearance at the Coors Light Birds Nest and will take the stage on Friday, Feb. 2. The evening is being presented by Hakkasan Nightclub, voted #1 nightclub in North America.

“We are excited to see how our music lineup is shaping up and thrilled to announce that OneRepublic will be a part of our concert series this year,” said Coors Light Birds Nest Chairman Dodge Earnhardt.

Tickets are on sale now through Ticketmaster (800-745-3000, www.ticketmaster.com) and at all Ticketmaster outlet locations. General admission tickets for OneRepublic start at $65, while VIP tickets are available starting at $300 and provide exclusive access to the Jameson VIP area where guests are treated to a complimentary catered dinner, complimentary drinks and access to a newly redesigned premium viewing area for the shows.

ABOUT ONEREPUBLIC
In 2007, OneRepublic, founded by lead singer Ryan Tedder and lead guitarist Zach Filkins, released their debut album, Dreaming Out Loud. Its lead single “Apologize” was notably remixed by Timbaland, becoming a huge international success, reaching #1 in sixteen countries, and subsequently earning the group a Grammy Award nomination. OneRepublic has produced four studio albums including their third studio album, Native, in which single Counting Stars has sold nearly 10 Million units, reaching #1 in 54 countries. OneRepublic’s most recent album, Oh My My, was released in 2016 and debuted as the group’s highest-charting album to date on the Billboard Hot 200. The band continues to release new music with 2017’s ‘”Truth to Power” (featured in the film Inconvenient Sequel), “No Vacancy” and “Rich Love (with Seeb).”