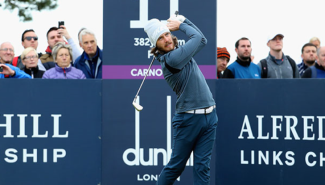 Tommy Fleetwood broke the course record at Carnoustie by shooting 9-under 63 to tie for the lead with defending champion Tyrrell Hatton after two rounds of the Alfred Dunhill Links Championship on Friday.

Hatton also tamed the tough British Open venue, shooting 65 to move to 11 under par for the tournament. The English golfers were a stroke clear of Nicolas Colsaerts, and two ahead of Paul Dunne and Marcel Siem.

Tweet
More in this category: « 9 Weird Shots the Rules of Golf Say You Are Free to Hit on the Course How a PGA Professional Helps Connect College Coaches with Potential Recruits Through Technology »
back to top