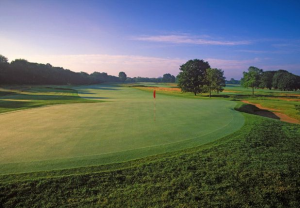 Profile America — Wednesday, July 19th. The first 18-hole golf course in the United States opened this week in 1893 in Downer's Grove, Illinois. The course was an expansion of an existing 9-hole facility. The Chicago Golf Club soon moved to a new course in nearby Wheaton, and the Downer's Grove course has since reverted to 9 holes. The sport arrived on these shores from Scotland, and there is evidence of golfing in the late 18th century in South Carolina and Georgia. Today, over 25 million Americans play the game at least once a year at the 11,280 golf courses and country clubs across the nation. These establishments employ over 295,000 people in the nearly $21 billion per year pursuit of what a frustrated player called "a good walk spoiled." You can find more facts about America from the U.S. Census Bureau online at www.census.gov.

Tweet
More in this category: « New Affordable Home Golf Simulator for Every Golf Enthusiast Released by ProTee United Premier Fitness Systems – A Fundamental Approach To Make You a Better Athlete »
back to top