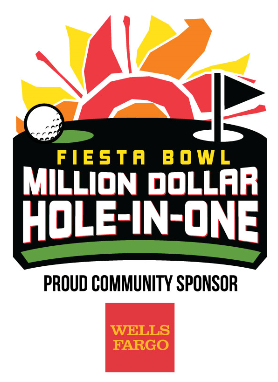 Take Your Shot at $1 Million.

Thousands of amateur golfers from around the country will converge on the Arizona Biltmore Golf Club from Thursday, November 3, through Sunday, November 13 to compete in the 32nd Annual Wells Fargo Fiesta Bowl Million Dollar Hole-In-One. The event was the first of its kind in the Valley and continues to be one of the nation’s best with more than 125,000 golf balls hit each year.

How Does It Work?

The top three qualifiers from each preliminary day, which includes any participant who hits a hole-in-one, will advance to the finals on Sunday, November 13 at 2:00 p.m. Along with advancing to the finals, qualifiers each day will win daily prizes ranging from a full set of PING irons to Fiesta Bowl tickets. At finals there will be one hole on the green worth $1 million and two additional holes worth $50,000 each. The contestants who hit closest to the pin each win a grand prize – a Holland America Cruise, a Forest Highlands Golf Retreat, Bennett Lane Winery Private Tour – just to name a few!

Has Anyone Ever Won the $1M Prize?

Since 1984 thousands of amateur golfers have competed for the ultimate prize. Almost 4 million golf balls have been hit, but only one of those balls (so far) has brought home $1 million.

Tweet
More in this category: « 19 Universities will Compete for the PGA Jones Cup This Week Win a Chance at a Million Dollars from Bunker to Bunker and The Fiesta Bowl! »
back to top