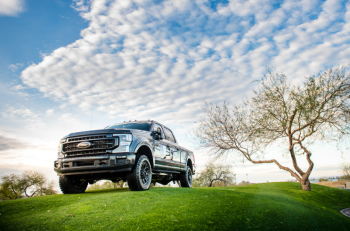 Thanks to Ford, the Official Vehicle of the Waste Management Phoenix Open, all fans will be admitted FREE of charge on Monday, Feb. 7 and Tuesday, Feb. 8 to the WM Phoenix Open as part of “Ford Free Days” courtesy of your Arizona Ford Dealers.

As part of this renewed partnership, the fourth annual closest-to-the-pin contest called “FORD Drive One for Arizona Charities” will be held on the iconic 16th hole, giving players a chance to win $10,000 for one of 10 local non-profit organizations.

“This marks the sixth year ‘The People’s Open’ and our outstanding partner Ford have teamed up to offer free admission to all of our fans,” said Tournament Chairman Dr. Michael Golding. “We’re thrilled to offer Ford Free Days once again, but even more so to share a common commitment to our local communities.”

Beyond Ford Free Days, the Arizona Ford Dealers will also host Country Night at the Coors Light Bird’s Nest on Thursday, Feb. 10 with Sam Hunt and special guest Russell Dickerson. Ford will bring out the latest Ford vehicles and showcase them near the entrance of the Coors Light Bird’s Nest for fans to check out, along with some special giveaways.

As the Official Vehicle of the Waste Management Phoenix Open, Arizona Ford dealers will be providing more than 150 courtesy vehicles during tournament week to transport PGA TOUR players, tournament officials and Waste Management Phoenix Open staff. Those vehicles, primarily 2021 Expeditions and 2021 Explorers, will go up for sale at the Phoenix metro Ford Dealerships following the tournament.

Tweet
More in this category: « Cameron Smith's INSANE 34-Under Winning Highlights from Sentry | 2022
back to top