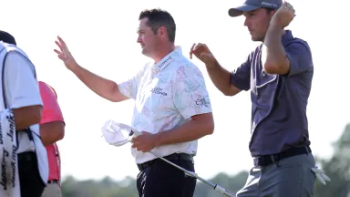 HOUSTON – “There’s no way I should be standing here,” Jason Kokrak laughed in the moments following his third PGA Tour victory at the Houston Open.

Kokrak’s surprise went well beyond the normal Tour player humility in victory. In fact, it was a mild surprise he even played the event.

“I contemplated actually withdrawing because I was hitting it so bad,” he admitted following his come-from-behind victory over Scottie Scheffler and Kevin Tway.

So bad, in fact, that he told swing coach Drew Steckel “I can’t play.”

“I was on the phone with him [on Tuesday] for nine holes of his practice round,” Steckel said. “He was struggling big time.”

Following an extended range session on Tuesday, while still on the phone with Steckel, Kokrak saw improvement on Wednesday during the pro-am and he managed an under-par round (68) to start the week. But he appeared to unravel early Saturday morning when he returned to Memorial Park to complete his weather-delayed second round with what he called a “debacle.”

Tweet
More in this category: « Matthew Wolff’s Incredible Ace at the Houston Open Diplo and Cole Swindell Added to Coors Light Birds Nest Wednesday Lineup - Get Your Tickets Now! »
back to top