Plan to Play Better: Game Plans Will Lower Your Scores on the Golf Course 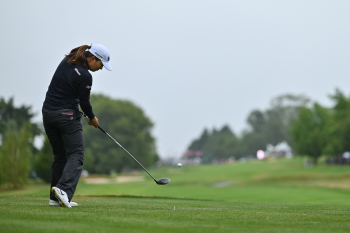 Just this last weekend, we saw several examples of how developing and implementing a specific strategy led to success for the men at Royal St. George’s. Most who watch golf just assume the players are so good, they can just hit it where they want. Most of the time they can, but ALL players get nervous and therefore will favor a safer target in their strategy.

Having Trouble Reaching a Goal? Harness the Power of Phil Mickelson's Process
Ball striking will play just as important a part at this week’s Amundi Evian Championship as well, but believe it or not the champion on Sunday will be the woman who has the resilience to follow her plan of attack.

The methodology is simple: Following a game plan can help you improve your score significantly. The next time you’re on the short-game practice green, try this simple chipping demonstration...

Start by choosing a simple chip shot about forty feet from the hole. It can be from the fairway cut or rough just don’t make it too hard. Drop five balls on the ground and select a club to hit the shot. Once you’re ready, it’s time for the test. The challenge is to hit all five shots short of the hole.

It has been statistically proven the average golfer fails this test more than 90% of the time. The reason is because golfers are not disciplined enough. Was the goal to get one in the hole or even close to it? No, the goal was to keep all five balls short of the hole. Most players will hit one short and instead of trying to hit the next one to the same spot or shorter, they attempt to get the ball closer to the hole. In doing so, they eventually fail because most golfers aren’t that skilled.

Here’s why this test can be so powerful in helping you improve. LPGA players competing in the Evian Championship this weekend will play very disciplined. That resolve to use their strategy and not get greedy is what separates those inside our television from those watching from outside the television. Start to develop a strategy the next time you play. Create some personal principles that take advantage of your strengths on the course.

Change your perspective on how you play a round of golf. Select smart targets and use a balanced approach. Now, retake the five ball test from the same exact spot. The second time most pass because they are thinking about the actual challenge rather than the hole. This paradigm shift in thinking over the course of your round (season) will positively affect your scoring.

Watch the women this weekend and notice their chess-like movement throughout the course. Pay particular attention to their trouble avoidance ability by knowing the best place to play from at all times. Believe it or not, everyone’s handicap can be cut in half by using better course management and playing smarter golf. Take a significant step toward your improvement by “planning” to play better.

Tweet
More in this category: « Golf Rules Quiz - 8 Questions to Test Your Knowledge Inbee Park Searching for Elusive Major Crown »
back to top