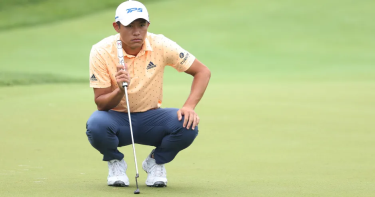 Collin Morikawa jumped out to an early lead at the Memorial Tournament presented by Nationwide, doing so with a 'new' putter in the bag.

The 24-year-old has had a rough spell on the greens, finishing 2020 ranked 128h in Strokes Gained: Putting. He’s 180th in that statistic this season.

The Californian has been using a TaylorMade Spider FCG mallet-style putter, along with a ‘Saw’ grip he learned from Mark O’Meara, for much of this year, but in search of a change of fortunes on the greens, Morikawa has now switched back to a blade-style putter. He used a blade-style coming out of college and in last year’s win at Muirfield Village, at the Workday Charity Open. He added a SuperStroke grip and adjusted the loft on his blade this time.

But this isn’t your average story about a TOUR player switching putters. Morikawa settled on the putter after consulting TaylorMade’s online ordering portal that is available to everyone, from TOUR players to mere mortals. It paid off, as Morikawa shot a first-round 66 while gaining 1.8 strokes on the greens.

GolfWRX: In terms of MyTP, what did Collin see that he liked and why?

PD: Collin was checking out the options online and reached out to us with his specific needs for the head, the insert, alignment etc. What we built for him is similar to the one he was previously using – a TP Juno with a long neck and sightline on the topline.

The main difference is we machined the face to take loft away, 2 degrees to be exact. With his new setup he has his hands more forward. This allows us to then bend the shaft forward to get the loft he wants in a position where the face is square with hands forward. … If we don’t machine the loft away and simply bend the shaft forward for his new hand position the putter would have way too much loft on it.

Additionally, he commented on how much he likes the copper insert in his FCG putter. We do not have copper available for the TP putters, so we put a stainless steel insert into this putter for a harder feel.

So there are a couple of changes that were exclusive to him, but consumers can pretty much spec out 90% of his putter on our website.

If a consumer wanted to spec out his putter on our website, these are the options they should look at:

GolfWRX: Any idea what inspired him to start looking at MyTP? More about a search for something better suited to his needs, or, like we all do, the fun of designing something?

PD: He used (MyTP) as inspiration as he was talking to our team and looking for a fresh TP Juno.

GolfWRX: What was the process after Morikawa built his Juno to getting a putter in his hands? Any differences from the retail model?

PD: Collin was looking at the options in the TP putter and wanted to add some customization to it as he’s used this model before, he just wanted some additional elements added.

GolfWRX: Collin was in the Spider FCG. Who does that putter work well for?

Todd Chew: FCG is ideal for a player who has always used a blade and wants the added stability of a mallet, but with the feel/balance of a blade. Ultimately, a true mallet will have more stability, but it feels very different to swing one. FCG is not as drastic of a change for a blade player.

GolfWRX: The switch from a mallet to a blade (even one with blade-like properties) is significant. Why did Collin make the switch? Has his stroke changed?

TC: His grip changed significantly which has made his stroke quite different. He hasn’t played a blade with the new grip and technique yet, so wanted to give it a try.

GolfWRX: From a fitting and club building standpoint, is there a lesson here for the average golfer?

TC: As always, getting fit for a putter is as important as the other 13 clubs in your bag. You need to feel comfortable and confident making the stroke, as much as looking at the numbers to see which rolls better for you to.